For we are not fighting against flesh-and-blood enemies, but against evil rulers and authorities of the unseen world, against mighty powers in this dark world, and against evil spirits in the heavenly places. - Ephesians 6:12

Some days the evil and the dark that we face are flat-out terrifying. New diagnoses, condescending doctors, absent friends, daily loss and grief, unrelenting pain.

Then Goliath, a Philistine champion from Gath, came out of the Philistine ranks to face the forces of Israel. He was over nine feet tall! He wore a bronze helmet, and his bronze coat of mail weighed 125 pounds. He also wore bronze leg armor, and he carried a bronze javelin on his shoulder. The shaft of his spear was as heavy and thick as a weaver’s beam, tipped with an iron spearhead that weighed 15 pounds. His armor bearer walked ahead of him carrying a shield. - 1 Samuel 17:4-7

Not to mention the taunts and the threats that find us cowering in the corner! You're useless, you're lazy, God doesn't care about you, if you had enough faith you wouldn't be going through this, everyone will leave you, you're going to die.

Goliath stood and shouted a taunt across to the Israelites. “Why are you all coming out to fight?” he called. “I am the Philistine champion, but you are only the servants of Saul. Choose one man to come down here and fight me! If he kills me, then we will be your slaves. But if I kill him, you will be our slaves! I defy the armies of Israel today! Send me a man who will fight me!” When Saul and the Israelites heard this, they were terrified and deeply shaken. - 1 Samuel 17:8-11 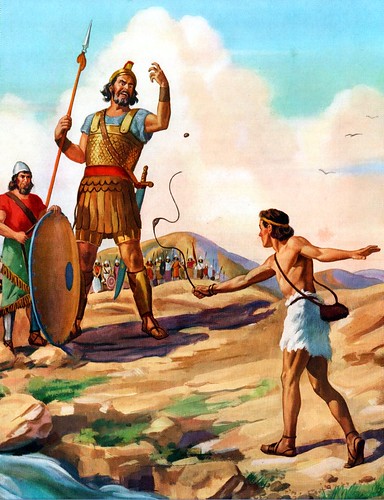 And it goes on and on. And on. No light at the end of the tunnel, no end in sight.

For forty days, every morning and evening, the Philistine champion strutted in front of the Israelite army. - 1 Samuel 17:16

Our enemy, he wants us to come out feeling like a young child. He wants us naked, with no armor. No shield. No sword. And most days, that's exactly how we feel, isn't it?

But the enemy has forgotten that with our God, nothing is impossible. Our armor, sword and shield are supernatural, just as our enemies are. He's forgotten. He's underestimated.

David replied to the Philistine, “You come to me with sword, spear, and javelin, but I come to you in the name of the Lord of Heaven’s Armies—the God of the armies of Israel, whom you have defied. Today the Lord will conquer you, and I will kill you and cut off your head. And then I will give the dead bodies of your men to the birds and wild animals, and the whole world will know that there is a God in Israel! And everyone assembled here will know that the Lord rescues his people, but not with sword and spear. This is the Lord’s battle, and he will give you to us!” - 1 Samuel 17:45-47

God of the Impossible, keep us reminded daily. Help us to lean no on our own selves, but to give the battle over to You along with all glory. In Jesus' Name, Amen...

Read My Other Devotionals